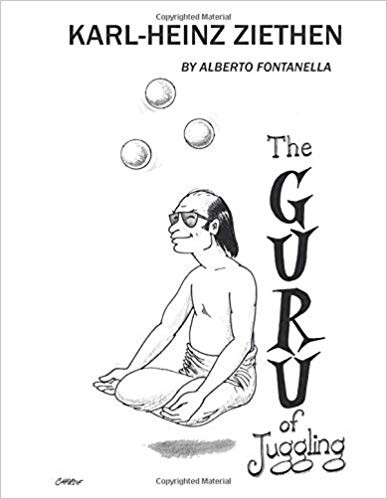 Beschreibung Bewertungen 0
Beschreibung
Karl-Heinz Ziethen is known in show business not only as an expert on juggling but of circus and... mehr
Menü schließen
Produktinformationen "Buch - The Guru of Juggling"

Karl-Heinz Ziethen is known in show business not only as an expert on juggling but of circus and variety arts in general. He was a vital part of the revival of variety arts in Germany, through his assistance in providing knowledge and advice to several variety theaters such as Tigerpalast in Frankfurt and Quartier Varieté (now the Wintergarten in Berlin). Karl-Heinz Ziethen has also been active as an exhibition designer and adviser to projects such as the Rastelli exhibition in 1996 at the Chamäleon Variety Theater in Berlin. Along with Hacki Ginda, he produced a three-month Chamäleon Variety show with different performers called “Liebling der Götter,” a homage to the legendary Enrico Rastelli (1896-1931). He is an honorary member of “L’École Nationale de Cirque” in Montreal and has shown films and lectured on various areas of performing arts at the Centre National des Arts du Cirque (CNAC) in Châlons-en-Champagne, Marne (France).In 1989, Karl-Heinz Ziethen received the first Extraordinary Service Award of the “International Jugglers Association” in Baltimore (USA) for his long-term devotion to juggling. The Saltarino Prizer 2005, from the German Society of circus fans “Die Gesellschaft der Circusfreunde,” awarded for outstanding journalism in the circus and the performing arts domain is a well-deserved acknowledgment of Karl-Heinz’s contribution to the art.